Liquore Strega, an Italian digestif distilled from a secret recipe of around 70 herbs and spices, has been produced out of the same factory in Benevento, Italy since 1860. Amazingly, the distillery is still run by the original Alberti family and is now in its fifth generation.

The city of Benevento claims to be an ancient site of witches’ rites. Witches from all over the world are said to have gathered at night around a magical walnut, where they created a magic potion that forever united couples who consumed it.

As legend has it, Giuseppe Alberti, a spice merchant, was out gathering herbs for his elixirs with his father when he came upon a witch trapped beneath a fallen tree branch. He and his father helped her, and as a reward, she bestowed upon them the secret formula for this magical liqueur. The only condition was that they never reveal the recipe to another living soul. To this day, only two people alive know the secret formula for Strega, which is the Italian word for "witch". 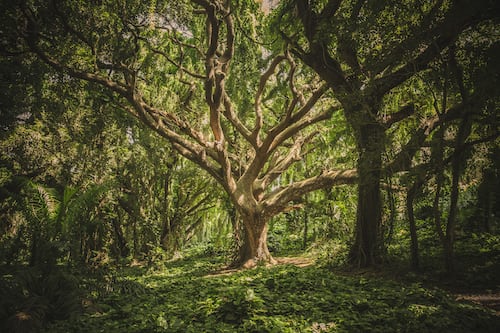 With so much mystery surrounding the formula, what we do know is that of its 70 herbs and spices, it incorporates Ceylon cinnamon, Florentine iris, Italian Apennine juniper, and Samnite mint, which grows along the riverbanks in the whole region. The liqueur gets its characteristic yellow color from the precious Saffron that is added to the herb distillate.

We also know that it is aged in ash barrels over a long period of time to ensure a perfect blending of the different aromas. The resulting distillate is 80 proof, making it as strong as any standard spirit like vodka or gin. Only after the aging process is the liqueur bottled and distributed all over the world.

The classic and dreamlike label of Strega depicts both a hooded crone possessing a broom, as well as an ensemble of sparsely clad women, raucously dancing hand in hand with satyrs in the forest. Based on Strega's lore of being a magic potion that forever united couples who consumed it, and knowing that the liqueur's recipe incorporates saffron to create its distinctive color and flavor, we're going to take a closer look at saffron and its uses.

Saffron, likely the most precious and expensive spice sold on the planet, is deep yellow in color and pleasantly sweet in flavor. It's made from the dried stigmas of the Crocus flower, which originates in Southwest Asia and can be found in some parts of Europe. Though it is said to grow well enough in most gardens, each flower only contains 3 stigmas, thus requiring over 75,000 flowers to make a pound of saffron. Harvesting is done entirely by hand during only one magical week per year. It's for this reason that saffron can be found for no less than $500-$5,000 per pound!

The Greek legend of Crocus and Smilax details not only their love affair, but also explains the vivid color and magickal effects of the crocus flower that gives us saffron. The story goes like this: "Crocus, a handsome and virile man, fell in love with a nymph named Smilax. During a brief period of idyllic love and passion, Smilax, flattered by his amorous advances, was under the spell of his devotion. But soon Smilax became bored by Crocus’ attentions. After he continued to pursue her against her wishes and became obsessed with her, Smilax bewitched him, transforming Crocus into a saffron crocus flower. With its bright orange stigmas, it is said this remains a symbol of Crocus’s undying passion and eternal flame of love for Smilax."^

It's no wonder the witches of Benevento incorporated saffron into the love potion thought to have become Strega!

Not only does saffron's story date back to ancient Greek times, but we see its use dating back 50,000 years to prehistoric sites in Iran, where cave wall depictions contained saffron-based pigments.

Of course, saffron's use extends far beyond that of ancient history. Western use primarily associates it with traditional cuisine, lending its distinctive color and flavor to Italian risotto milanese, French bouillabaisse, Spanish paella, and Indian biryanis. 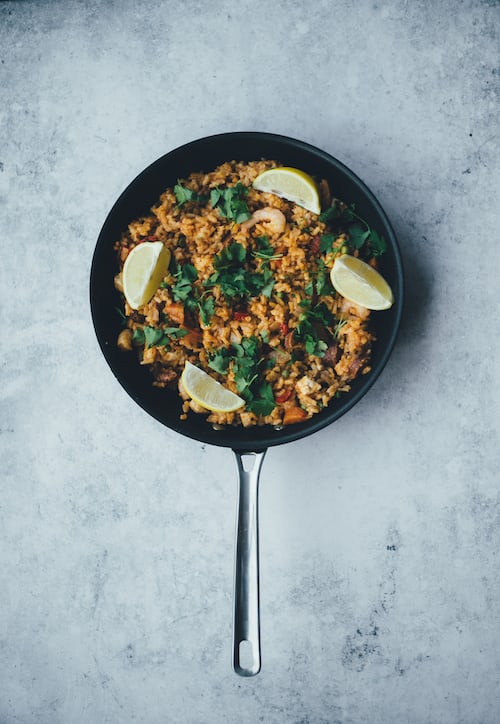 Medicinally, it has been used for a broad variety of conditions, including coughs, colds, stomach ailments, insomnia, depression, fever, heart trouble, and fertility. Ancient healers Galen, Pliny the Elder, and Hippocrates touted saffron as a panacea-like herb.

It is still thought to be effective for these ailments, but, realistically, has become too expensive to be worth using in any sort of effective quantity. Adding to its price and scarcity is the fact that climate change and overproduction of monocropping pose a significant threat to the future of the crocus plant. For that reason it's important to research the source of your saffron, should you choose to explore its benefits more closely. 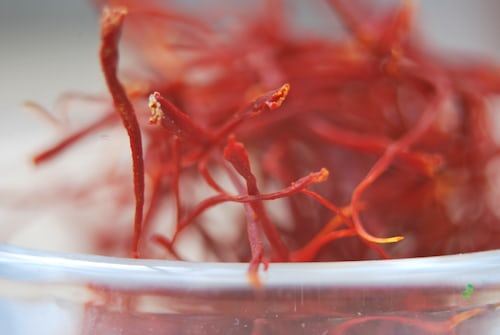 Fortunately, for magickal use, one can get away with using the smallest amount of saffron for just as much benefit as more. For that reason, I recommend using Strega! You not only get the benefits of saffron, but also the symbiotic benefits of all the other 69+ herbs in its formula. If we imbue saffron's associations onto Strega, we see that they are associated with:

If it isn't clear by now that saffron is a powerful ingredient in rituals and spells for passion, love, lust, and fertility, then I didn't do my job. It can used straight or diluted with moon water to anoint candles and sigils, but be aware that it can stain.

Due to saffron's high value and rarity, it is an excellent offering for any deity and is a traditional ingredient in crescent moon cakes made in honor of the Phoenician Goddess Ashtoreth.

Add it to your bath to channel the Fire element, drawing passion, strength, and intuition.

Drinking saffron infusion is thought to enhance psychic abilities. If you're using Strega in its place, however, I urge just the smallest amount (1 ounce or less depending on your alcohol tolerance). While some traditions call for intoxicants in order to channel other realms, I personally feel that alcohol intoxication threatens a genuine connection to the higher self. I formulated the Scarlet Enforcer for the Spirit Haus. Light and herbal yet still potent and spirit-forward, it is a delicate but strong slow-sipper, versatile enough for any time of year.

Add contents to a glass stirring vessel, add ice, and stir for 15-20 seconds. Strain into a cocktail glass. Garnish with fresh mint in spring and summer, or a star anise pod in autumn and winter.

If using for ritual purposes, replace the gin with plain water or moon water if that's in your practice. Otherwise, enjoy heartfully during some much deserved "me" time, or with your sweetheart to see if the legends are true!

Top 3 Herbs for Your Winter Bodycare Routine Posted on November 20, 2022

Adaptogenic Herbs: What's All the Hype About? Posted on November 20, 2022